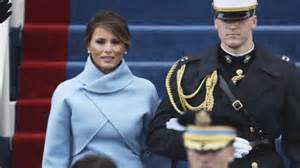 Everyone wants to know Miss Theresa Bass DBA Kalanit reflection on our new first lady and her dress attire coming into office.

One word, “Impressive”.  Notably.  She could not have chosen a more suitable attire. You just need to do one thing and it is

smooth sailing for you, my dear First Lady. Now we can admire how Melania Trump is fulfilling the first lady role

her way. Compliments of CBS news.

I am a republican and I generally support my party. Why should our President elect, Mr. Donald Trump be any different? He

deserves a chance like every other president that came into office before him. I don’t play the blame card. As mentioned before

we all go behind the curtain and pull a lever that we hope no one see as we try not to insult others delicate sensibility. I can’t

apologize for standing behind Judge Jeanine Pirro in her opening statement resonating on our President elect, Mr. Donald

Trump first 100 days into office. He is just doing what he promised the American people. You can select any article on the

internet about Syria and the ethical dilemma’s that we all share. I told my Rabbi that I feel as if I have lived in the Holocaust

for the last thirty years of my life. My freedom, my constitutional and civil rights have been stripped. I have filed formal

complaints to every federal agency that exist. I will not discuss Bill Clinton’s’ position on Rwanda nor will I entertain the stance

of the Bush Administration. Genocide in any form is an atrocity and should not be tolerated.

Aaron Strouse shares his article on the perspectives of Judge Jeanie Pirro.

If we define teleology as something that relates to the study of ultimate causes in nature, (or of action in relation to their end or

design in the universe. If Gods’ design was creation of human kind, (B’ tzelem Elohim), made in his image, one would give ethical

consideration to the treatment of all human kind. This is inclusive to what the Australian museum calls the Neanderthals, Homo

Sapiens. De-ontology is the study of which is considered to be an obligation or duty. De-ontological ethics is the normative

ethical position that judges an action based on rules, (reference: https://en.wikipedia.org/wiki/Deontological_ethics).

The “new wave” slavery in any manner is empirically flawed in the design of the insane. To contrast de-ontology/Kantian and

consequentialism/Utilitarian ethics to Confucians ethics the main theme should be “First Do No Harm”.

beings. One must also evaluate and determine the type of action, who bears the duty and the action to take to fulfill the

Declarations of human rights. Staying out of the bloodshed of other countries problems when it comes to safeguard of human

Rawls’ “veil of ignorance’ is a form of slavery as business ethics. This is what is going on in the United States as well as around

the globe. Fundamental principles of protection of human rights need to be brought into play.

What Do We Do Now

Devise a framework to free all slaves. All over historical literature you will find, NEVER LET THIS HAPPEN TO US AGAIN!

But it has. It happened to me it has happened around the world to people who practice certain religions. Numerous stereotypes

still exist and our basic freedom have been stripped. As a Jew at times I feel that the political agenda is against the normative

foundation of respect and liberty. Did anyone help me? HELL NO!

What am I going to do. Take my power and take back my life. What should I suggest the president of the United States do,

human rights. President Donald Trump has my support and he is just a man with a lot on his plate. He is handling his mission

statement of his promises to the American people to safeguard our lives. Our former President Bush did the same thing.

LOCK DOWN APPROACH! After 911 he safeguarded the USA. To no avail people found it harsh undiplomatic and the lost of

military lives damaged family structure and belief. Believe it or not, he had no other choice. George Bush is a military man. Been

there done that. He felt it was them or us and our men and women in military take an oath of placing their life in harm’s way to

safeguard America. Genocide is back and it needs to be stopped. That is a political agenda not mine. I am angry and by any

means necessary I’m going to take myself back out of the realm of slavery and genocide.

Under Fire for Women Who Work

I am so proud of you!

A Warm Welcome To The President and First Lady of the United States of America!

The Power of Two